On 3rd February, at Fieragricola, Lovol Arbos Group S.p.A held a press conference with the national and international sector media.
The aim of the initiative, as its title "Warm up 2016" made clear, was to present the projects the group wishes to complete in the near future.
There are basically three key points that Lovol Arbos will be focusing on in the coming months. The first is to develop a comprehensive product range including tractors with varying horsepowers and different types of equipment and harvesting machines. The second is to design an innovative distribution model. And the third is to proceed with the takeover of new companies that will see the company structure develop into a real industrial holding in charge of all the group's European operations and brands.
With regard to these various points, the press conference gave Lovol Arbos Group S.p.A. the opportunity to illustrate all the events it has been involved in over the past few months. In 2015, in fact, the group took complete control of Matermacc and finalized its takeover of Goldoni, whose production - after being on hold for fourteen months - was relaunched on 18th January with an optimised production layout. "We have identified Goldoni's weaknesse," explained Andrea Bedosti, the Lovol Arbos Group S.p.A. CEO. "The machines produced up until now have been successful and the right dimensions, but to keep our cutting edge we must improve their equipment interaction. We are therefore developing both our hydraulic and electronic sectors. Moreover, added Bedosti, under this new management, production will be purely order-based."
Massimo Zubelli, the Matermacc CEO then talked about Matermacc, pointing out that thanks to the company's efforts in terms of managerialization it succeeded in finishing 2015 with a profit, despite the fact that 2015 was such a difficult year for everyone. 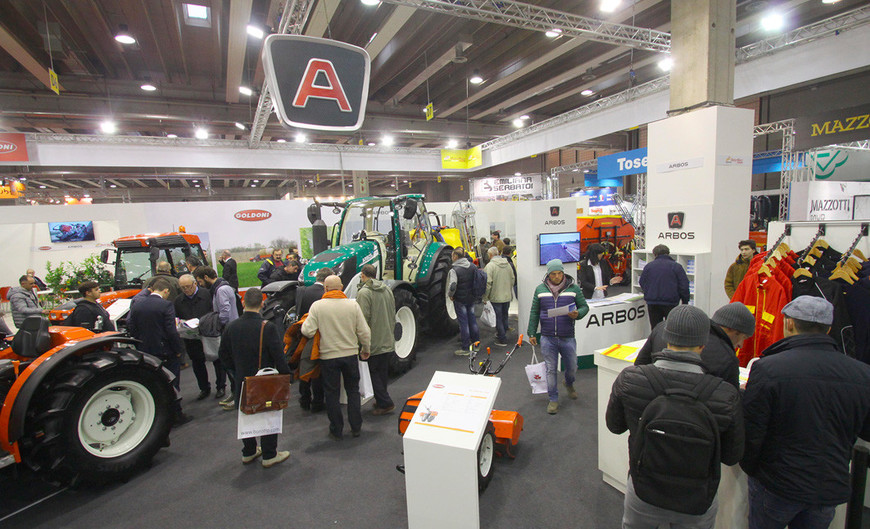 "Matermacc's development strategy," explained Zubelli, "has improved the company's layout. We have introduced new professional figures and from March onwards we will extend the product range. We have also approved an R&D budget that reaches 8-9 per cent of our turnover. We are convinced that this is a very important commitment as normally companies invest only about 4 per cent of their turnover in R&D."
The extension of the factory complex in San Vito al Tagliamento (PN) was also highlighted, as the combined production floor area of Matermacc and Goldoni now reaches a total of 285,000 square metres, all located in Italy.
There are news for the Arbos brand too. The main goal for 2016 is to launch the 5000 series tractors in Europe as they are now ready for this market. At Eima 2016, the 6000 and 7000 series, both of which are currently in the prototype phase, will also be unveiled.
The Group is also working hard to complete its combine harvester project before the end of 2019. "We started with the Arbos 8000 drawings," explained Bedosti, "and we are currently building a machine that has already aroused great interest on the Chinese market, because it has a production capacity three times that of the combine harvesters normally used in China, and 12 Kg/sec compared to 4 Kg/sec makes a difference."

At the Lovol Arbos Group S.p.A. stand at Fieragricola, visitors were also able to admire the group's entire range, starting with the new Arbos 5130, that enjoyed its Italian premiere in Verona. The 5000 series is located in the 100 to 130 hp range and consists of 4 models: the 5100, 5110, 5120 and 5130, offering 100, 110, 120 and 130 hp respectively. For the Goldoni company, all the available models were on stage at the fair in Verona and the company also presented a high precision viticulture project developed in collaboration with Spezia Srl. The Dynamic Show also showcased the specialised GOLDONI Energy 60 combined with a variable speed 111 VRT GPS leaf stripper with an automatic foliage approach system. Last but not least, Matermacc exhibited its MSD planters for sowing cereals and the MS 8230 for sowing maize. These are already known to the public, but were displayed in Italy for the first time, along with a sprayer prototype connected to the new Arbos 5000 series tractor.
Our website uses cookies including third party cookies to ensure you have the best browsing experience. For more information or to amend your cookie preferences, access our Cookie Policy. By clicking on the CONSENT button you consent to the use of the cookies.
Accetto