Andrea Bedosti, Managing Director of Lovol Arbos Group S.p.A, wins the "State Distinguished Recruited Expert" award within the "1000 Talents Plan for High level Foreign Experts" programme.
Included in the "1000 Foreign Expert Plan" programme, which was established by the Chinese government in 2008 to encourage the introduction of one thousand foreign experts in the local scientific and industrial community, the “State Distinguished Recruited Expert” award is a high recognition given by the Chinese government to those people who have been able to contribute to the growth and improvement of the scientific and economic system of the People's Republic of China.The award ceremony, led by Yin Weimin, Minister of Human Resources and Social Security of the People's Republic of China, took place on April 16th, 2015 in Shenzhen City during the 14th Conference on the International Experts Exchange sponsored by the Chinese Government.The programme is addressed to scientists, researchers and academics who are expert in technologies, industrial techniques and managerial innovation within the scientific, industrial and agricultural fields. This is all of primary interest for the evolution and the internationalization of the Chinese economic system. The objective of the "1000 Foreign Expert Plan" programme is to build a collaboration between foreign experts, Chinese industrial companies or Universities, so as to produce multiannual research and development plans and industrial expansion plans which can be co-financed by the Government, if considered of any interest. 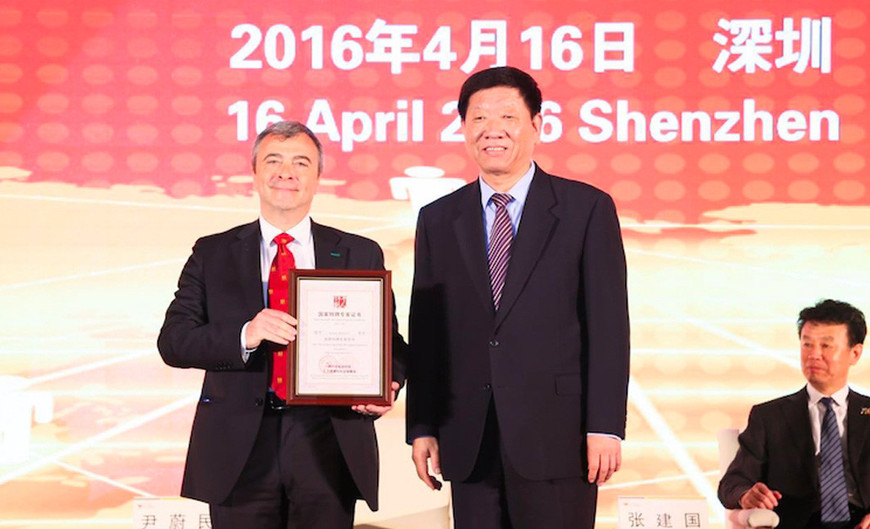 Of the 48 foreign experts admitted to the governmental "1000 talents" programme in 2015, 18 were awarded the "State Distinguished Recruited Expert" excellence award.
Andrea Bedosti, Managing Director of Lovol Arbos Group Spa, European holding managed by Weifang Shandong’s Lovol Heavy Industry Ltd., was awarded the "Distinguished Recruited Expert" for the contribution given in the field of advanced design of three families of 100 to 270 HP tractors meeting the European standards, whose production is expected as much in China as it is in Europe, but also for the Merge & Acquisition activities developed and under development in Italy in the field of agricultural machinery, which led so far to the acquisition of Matermacc Spa and Goldoni Spa.
The latter activity is aimed at creating an Arbos "full line" self-propelled machinery and agricultural equipment whose objectives are the agronomic and technological innovation of the Chinese "state of the art" and the "business internationalization" of the parent company Lovol HI Weifang, already the largest producer of agricultural machinery in China with a turnover of around 3.3 billion euros.
Andrea Bedosti graduated cum laude in agricultural engineering at the University of Bologna in 1983. He has held senior management positions in various multinational companies in the field of agricultural machinery and commercial vehicles. Since 2006 he’s been a full member of the National Academy of Agriculture and of the Accademia dei Georgofili in Florence since 2009. In 2015 he became a full member of the “1000 Talents” programme, established by the Ministry of Human Resources and Social Security of the People's Republic of China.
Our website uses cookies including third party cookies to ensure you have the best browsing experience. For more information or to amend your cookie preferences, access our Cookie Policy. By clicking on the CONSENT button you consent to the use of the cookies.
Accetto